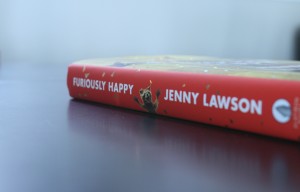 A little while back, I was wandering through the Chapters store that I used to work at (um yeah, how predictable is it that I used to work in a bookstore?) and I ran into a friend/past co-worker. Without missing a beat, she dragged me over to a shelf, grabbed a book, shoved it into my hands, and told me that I had to read it. I decided, after reading approximately one sentence of the dust jacket, that she was totally right – this was my kind of book. So here we are…

Furiously Happy is a compilation of essays written by Jenny Lawson. Lawson is a well known blogger who has managed to transform her blog posts into an amazingly hilarious and honest book.  Lawson’s “accept me as I am” attitude is palpable throughout the book as she describes how her life is coloured by mental illness. Among other things, the chapters focus on her relationships with family, her love of taxidermy, a trip to Australia, and just random thoughts in general. Lawson also addresses mental health stigma throughout the book as she makes comments like: “I can tell you that ‘Just cheer up’ is almost universally looked at as the most unhelpful depression cure ever. It’s pretty much the equivalent of telling someone who just had their legs amputated to ‘just walk it off.'” (p. 134)

Ok, spoiler alert. If I ever write a book, it will have the same tone and feel as this book. Lawson’s goofy, unabashed, and blatantly honest style of writing is pretty similar to my way of communicating…so obviously I think it’s great. It’s like we are being given a window into her mind and we get to see all the messy bits…which are really the totally awesome bits. I am a huge advocate for demolishing the stigma around mental health (as you may know, if you follow @CounsellorErin on Twitter) and I think Furiously Happy is the ideal anti-stigma book. Lawson points out many of the false beliefs that people have with regards to mental illness and she discusses many of the inane and ignorant comments that get directed towards people dealing with anxiety and depression. She embraces all of her idiosyncrasies, while giving readers an honest view of how life with a mental illness can be both shitty and wonderful.