This Week’s Book: Mistakes were Made (but not by me) (C. Tavris and E. Aronson) 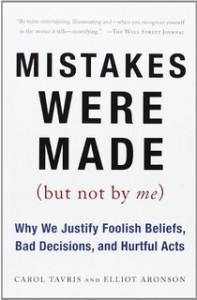 So I may have said this before, but I’m easily won over by a witty book title or a flashy cover.  Yes, I do in fact judge a book by its cover.  The book that I read this week was totally bought for its clever title…and since it’s been sitting on my shelf for a few years now, I figured it was time to crack it open.

Mistakes were Made (but not by me) looks at the science and psychology behind self-justification.  The authors discuss cognitive dissonance at length, defining it as “a state of tension that occurs whenever a person holds two cognitions…that are psychologically inconsistent.” (p. 13)  They examine how people naturally try to reduce dissonance as it tends to create an abundance of mental discomfort.  The authors discuss cognitive dissonance using a variety of examples set in various different contexts, thus giving the readers a comprehensive picture of how self-justification infiltrates all of our lives and actions.

I’ll say it bluntly – I thoroughly enjoyed this book.  Talking about a complex psychological topic like cognitive dissonance left this book with the potential to be horribly boring, but the authors managed to give interesting and relevant examples to illustrate the concept.  The authors also provide readers with some instruction on how to effectively live with cognitive dissonance…though not in a self-help sort of style.  Actually, they make it sound so simple – just take responsibility rather than making excuses or self-justifications.  If you’ve made a mistake, own it, learn from it and move on!  It’s a lesson that we can all learn from, especially since reducing cognitive dissonance is a natural (seemingly automatic at times?) reaction.  Whether we are willing to admit it or not, cognitive dissonance is something that we all experience.  For that reason alone, I would recommend this to everyone.  It certainly wouldn’t hurt for all of us to become more aware of this mental process!