This Week’s Book: Stick Figure: A Diary of My Former Self (L. Gottlieb)

So I’m currently trying to make my way through all of the many, many, many books on my shelf.  This is a big endeavour for sure.  I used to work at a bookstore, so books are abundant in my home and many of them have so far gone unread.  Thus, the book that I chose for this week’s blog came off the shelf…and I honestly have no idea when or where I bought it.  It’s been on that shelf for a long time…

Stick Figure is the compilation of a young girl’s diary entries.  The diary was written when Gottlieb was 11 years old – a year that took her from being an intelligent, spunky and sometimes awkward girl with no concerns about weight to an intelligent, spunky, and more popular girl with an eating disorder.  Like one of the comments on the front cover states, this book really does read like a novel.  The readers are privy to the author’s thought processes and are part of the dramatic shift from not fussing about food and weight to completely restricting everything that she ate.  Gottlieb’s descent into an eating disorder began out of spite her parents and was quickly reinforced by the reactions that she got from others (attention and anger from parents, awe and attention from classmates).

This book was actually really interesting.  When I first grabbed it off the shelf, I wondered not only when I’d bought it originally, but why.  I mean I don’t necessarily focus my work on people struggling with eating disorders, so it seemed like a bit of anomaly on the shelf.  However, I quickly realized that this was not just a book about disordered thinking and eating, it was about perception, relationships, and communication.

One of the biggest things that stood out to me was the ridiculous double standards conveyed by the adults in Gottlieb’s life and the messages that she received on a regular basis.  While her mom would barely eat her own meals, she berated her young daughter for doing the same thing.  I can only imagine how confusing that would be for an eleven year old girl.  Additionally, Gottlieb grew up in a time when gender roles were still very prominent and she had the self-awareness to know that she did not necessarily fit those roles.  So from very early on, she and others in her life labelled her as an outsider – something that spurred her later choices about food.  When Gottlieb meets a particular nurse who takes an interest in her (idiosyncrasies and all) and cares deeply about her, you can see her resolve about the eating restrictions start to falter.  As a counsellor, my heart broke for Gottlieb because it was clear how much she wanted to be listened to, understood, and loved in those moments.  After all, every kid just wants to fit in, be accepted and feel normal.

I would suggest that all parents read this book.  When you do, you’ll discover how the misguided focus of a parent, the lack of listening, and eventual desperation can have disastrous effects.  The way that we speak to our children and interact with them on a daily basis can shape their reactions, thought processes, and coping strategies.  This book is also an interesting read from a feminist perspective, as it questions our ability to deviate from the norms and be different.  It documents how we struggle with these concepts from a very young age. 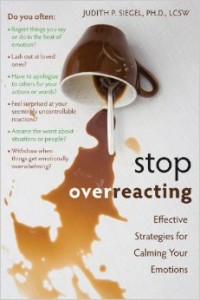 This week I picked up a book that’s been sitting on my shelf for a while. I think that I originally bought it because I was won over by the shiny picture of spilled coffee on the cover…oh and probably because of the topic too. In all honesty, I haven’t seen too many books out there devoted specifically to overreactions. So it just made sense that I should actually take this book off my ‘To Be Read’ pile (which is enormous by the way) and finally give it a read.

Stop Overreacting talks about an experience that we all encounter from time to time. Whether we’re the ones delivering the overreaction or the ones on the receiving end, overreactions can feel confusing in their impulsivity. This book spends a lot of time discussing triggers and devotes individual chapters to the four most commonly cited triggers: envy, rejection, criticism, and control. There are also sections looking at the challenges that overreacting can cause in the workplace and at home. Strategies for calming the emotions and (hopefully) halting overreactions can be found at the end of the book.

In my opinion, this book was…ok. I mean it definitely had its pros and cons. It was simply written (pro), though it did not totally deliver on the promises of the title (con). I often tell my clients that ‘awareness is the first step,’ so of course it would be a big pro in my books that this book talks a lot about triggers and developing self-awareness. The exercises at the end of each chapter promote insight and honesty with oneself. However, I feel like the section about strategies to calm emotions was much too small (despite being referenced in the title of the book). Don’t get me wrong, there are some useful strategies that are discussed. It’s just that the discussion is unexpectedly brief. Also, though it was implied throughout the strategies section that readers should talk about deep issues with a professional, it was never explicitly stated. I would worry that readers may dive into analyzing their own past, get overwhelmed, and things would feel worse as a result. I see this book as a good starting point for anyone who wishes to understand overreactions a bit better, though I would recommend testing out the strategies with the assistance of a professional.