This Week’s Book = Your Brain: A User’s Guide (by National Geographic) 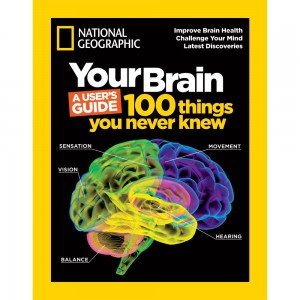 Ok, I’m back to reading! I’ll confess that I always find it challenging to pick up work-related and/or psychology-focused books after the holiday season. For some reason my brain just wants to linger in its relaxed, think-about-nothing-serious kind of state and I tend towards fun, easy to read novel. But alas, today it is exactly one month post-Christmas, so it’s time to get back into the swing of reading. I chose to be nicer to myself though and ease myself in with a magazine as opposed to a book.

I’ll admit it…I’m not a fan of the fact that National Geographic recently shifted from its non-profit roots to being majority owned by 21st Century Fox. It annoys me to the point of contemplating a boycott…but then I see a National Geographic magazine on the newsstands and they just look so damn appealing. So here we are, talking about National Geographic’s Your Brain: A User’s Guide. This magazine, as the title advertises, teaches the readers about the brain. Readers will learn about the learning, perceptive, unconscious, emotional, and aging brain. Sprinkled throughout the magazine are bright and relevant pictures, sidebars with interesting stories, and 100 facts that you may not have known about the brain.

This may seem like a relatively lame choice for my first review of 2016 and, in a way, I would agree. For me (and any other professionals, I would assume), this magazine reminded me of information that I learned waaaaay back in my undergraduate program when we would study the brain in 100/200 level courses. That’s cool – I don’t shy away from reminders and it’s been a while since I’ve read about that sort of stuff. It’s probably not a huge surprise to hear that my favourite chapters (yes, this magazine is split into chapters) were on the Unconscious Brain and the Emotional Brain. In those chapters, you can learn about mapping emotions, positive and negative emotions, mental health, dreams, altered states, and the importance of sleep for our brain (among other things). My penchant for describing complex concepts in a simplistic, easy to read manner was definitely satisfied with this magazine. I would recommend it for anybody looking to learn more about the brain, particularly the emotional and unconscious sides. After all, an understanding of the brain can give you a good foundation of knowledge for when you are considering the ups and downs of life. 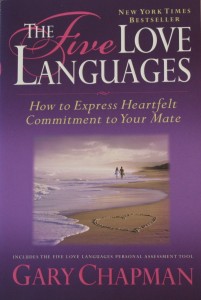 This Week’s Book = The Five Love Languages (by G. Chapman)

I’ve noticed that, in the autumn months, I seem to be talking more and more with clients about relationship issues. Is it because the happy, carefree feelings of summer have left us? Honestly, I’m not too sure if there’s a correlation there. Perhaps it’s the stress and feelings of tension that often come with all of the autumn and winter holidays. Regardless, I have found myself talking about the principles in this week’s book more and more lately, so I figured I’d better share it with you!

The Five Love Languages, written by Dr. Gary Chapman, describes the dynamics of relationships and love in a simplistic and practical manner. Chapman discusses the idea that love is a choice and it takes work. As he states, so many people enter into a marriage and assume that their love will sustain itself and never be an issue. Unfortunately, that’s not the case. In reality, love takes time, effort, and constant consideration for both partners to feel emotionally fulfilled. In this book, Chapman describes what he calls ‘the five love languages’: Words of Affirmation, Quality Time, Physical Touch, Acts of Service, and Receiving Gifts. Each person has their own primary love language, which helps to meet their emotional needs with regards to love. Chapman discusses the importance of recognizing and choosing to act on your partner’s love language as a way to fulfill the emotional needs of a love relationship.

My first encounter with this book was many years ago and the content completely made sense to me. While I think that calling them our love languages is kind of corny, I can’t fault the logic and principles behind Chapman’s work. In fact, I notice it all the time now in relationships that I experience or observe around me. I talk about love languages often with clients who are experiencing discord in their relationships and it always seems to be a concept that is understandable for people. Many of my clients seem surprised by how straightforwardly simple it all is and that seems to encourage them to try out new things in their relationship (i.e. speaking their partner’s love language). Personally, I love how Chapman discusses at length that love is a choice and it requires work. That’s a true fact that we often try to ignore when we feel enamoured with someone else…and then we are surprised when the cracks begin to show in the relationship. I recommend this book to anyone who is interested in looking at their relationships through a different lens and improving their interactions with loved ones. 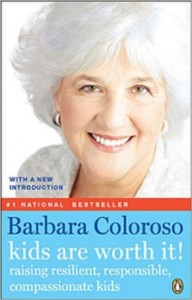 This Week’s Book = Kids Are Worth It! (by B. Coloroso)

Picture it (yup, I’m going all Sophia from the Golden Girls on you): Poofy, feathery 80’s hair and a flowing outfit with giant shoulder pads. This is how author Barbara Coloroso presents herself in the video version (called Winning at Parenting) of the book I’m going to review this week. I’m not going to lie – it’s a pretty awesome and funny video. Plus, I think it WAS filmed in the late 80’s/early 90’s…so, close enough with the fashion Barbara Coloroso. I’ve probably watched the video version of the book at least two dozen times, as I used to watch it with clients when I worked at Langley Community Services Society (@LangleyCSS). Even though I don’t seem to be working with too many parents at this point in time, I like to keep myself reminded of all the information and theories.

Kids are Worth It! is written by Barbara Coloroso, a well known speaker and author on the subject of parenting. In this book, Coloroso shares her unique theory on parenting. Her theory is attachment-based and aimed at building positive, healthy relationships between parents and children. She describes different styles of parenting and gives them cute, somewhat descriptive names: the Brick Wall, Jelly Fish and Backbone Parents. Coloroso also discusses specific challenges that parents tend to face with their children (i.e. chores, sibling rivalry, and teen rebellion) and how to handle them.

I found this book (and the video described above) to be insanely helpful when I was working with parents. Attachment is a concept that fits for me and makes sense when I consider parenting, families, and relationships. I actually really enjoy the video (hence why I was willing and able to watch it many, many times) – Coloroso is a very dynamic and humorous speaker…something that didn’t translate quite as well into the book. However, regardless of my personal preferences, I think that the information presented in the book is really helpful and would be beneficial for all parents to read. If reading isn’t your favourite, grab the DVD…if nothing else, I’m sure you’ll get a smile from the awesome 80’s-ness of it!

This Week’s Book = Boundaries: Where You End and I Begin (by A. Katherine)

Weird story…a few weeks ago, it was one of those weeks when all of my clients seemed to be experiencing very similar trials and tribulations.   I found myself discussing boundaries a lot that week – often a challenging, confusing, and uncomfortable topic for my clients.  I found myself wishing that I had some new ways to describe boundaries…then lo and behold, when I went into a local used bookstore (@BeanAroundBooks) on one of my breaks, this book was on the shelf! 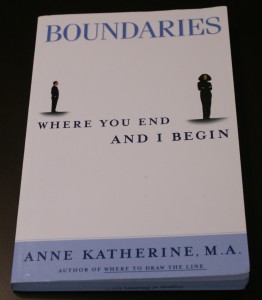 : Where You End and I Begin is a bit of an older book (published in 1991), but it offers some great descriptions and information about boundaries.  In the book, Anne Katherine describes the various types of boundaries, what boundaries are for, and why we want to have them.  She uses many examples throughout the book to illustrate boundaries and boundary-less situations.  Specifically, she discusses boundaries in the context of close and intimate relationships.  The end of the book is devoted to helping readers build and recognize boundaries.

You know, I found this book useful.  Given the publication date, I figured that the information would be a bit stale.  I was pleasantly surprised to find that the definitions, descriptions and examples seem to transcend time.  It was clear how passionate the author was about the topic of boundaries, particularly when discussing physical boundaries.  She actually gets a little mom-like when discussing that your body is your own and you get to choose who touches it and how.  That part felt a bit like a lecture…though a necessary one.  The most interesting parts of the book for me were the stories that were used as examples and I think that many readers will recognize themselves in those scenarios.  In my opinion, the book achieves what the title promises – it describes in explicit (but also simplistic) detail how boundaries define us as individual from others.

This Week’s Book = Attached: The New Science of Adult Attachment and How It Can Help You Find – and Keep – Love (by A. Levine & R.S.F. Heller) 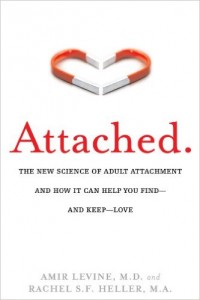 see a huge number of couples in my practice, I’m often talking to individual clients about their relationships. Attachment is a concept that I frequently discuss with couples or those dealing with relationship issues. Put simply, attachment is our need to be in close relationships with a few (significant) others and how we act emotionally and behaviourally to ensure our safety and closeness to those loved ones. Ok, it may sound much more complicated than it actually is…which is why I pulled out one of my favourite books to re-read and write about this week.

I really enjoy this book… this was probably the third time I’ve read it now. I feel as though attachment style and its direct link to our adult relationships is an under-researched and perhaps even undervalued idea. This book discusses the fluidity of one’s attachment style and how it can be influenced by many different factors. I often find myself telling my clients that awareness is the first step (with anything!) and this book really does do a great job of helping readers to develop an understanding of their individual attachment style and how that style can reveal itself in relationships. I recommend this book to anyone who wants to increase their self-awareness regarding their needs and why they act the way they do in relationships.